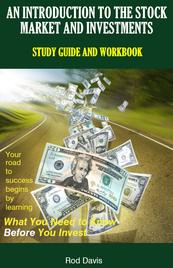 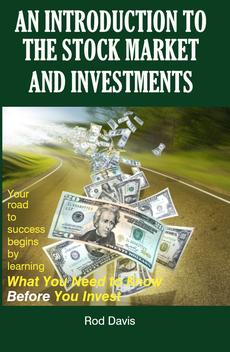 This Study Guide and Workbook is a companion to An Introduction to the Stock Market and Investments. It is designed for students who use that text in the classroom. It includes four different activities to help students remember the terminology and basic concepts of each chapter: a summary of the chapter, sample questions for classroom discussion, a vocabulary matching exercise, and a 10-question true/false practice quiz. I have observed the most difficult hurdle to overcome for most new investors is the language of finance. Most people feel intimidated by stock market reports because they don’t understand what is being said. Everything sounds like nuclear physics if you don’t know what is being said. However, you don’t have to be a rocket scientist to develop a sound investment strategy (although it wouldn't hurt). The concepts are simple once you learn the language. However, learning the vocabulary is only the first step to becoming successful. For any  endeavor to be successful, there is no substitute for hard work. What you get out of anything you do will directly correlate to what you put into it.

An Introduction to the Stock Market and Investments is the 4th edition of a book I originally wrote over 20 years ago. The title of the predecessor book is the subtitle of this one: What You Need to Know Before You Invest. The book is still true to its roots, designed to be an introduction to the fundamental principles of investing. It builds on tried and true methods of security analysis, but it has evolved as the market has evolved. It has been updated every few years to remain current. When it was originally written, the word capitalism did not have the same connotation it has today. First, you should be aware the stock market is capitalism. It's not a symbol of capitalism. It is capitalism, an economic system whereby anybody can become and entrepreneur or participate in the businesses of others. Capitalism has produced the highest standard of living for the greatest number of people, compared to any other economic system. But its success depends on government agencies properly executing their roll as moderators of fair and ethical business practices. There are checks and balances inherent in capitalism that do not exist in government sponsored systems. Corporations are held accountable to their shareholders and government regulators, but if the government initiates a socialist type of intervention into the system, it is not held accountable to anyone. One of the greatest threats to capitalism, aside from government becoming a competitor rather than an arbitrator, is the trend toward turning traditional approaches to investing into gambling or get-rich-quick schemes. Day trading has become a new version of a slot machine, where gamblers try to get all the indicators to align for a jackpot. The concept of being an owner of a company is irrelevant if one only owns it for 10 seconds, 10 minutes, or 10 days. Investing has always favored those with a long-term approach. Perhaps if you understood what you need to know before you invest, you might become a better investor.